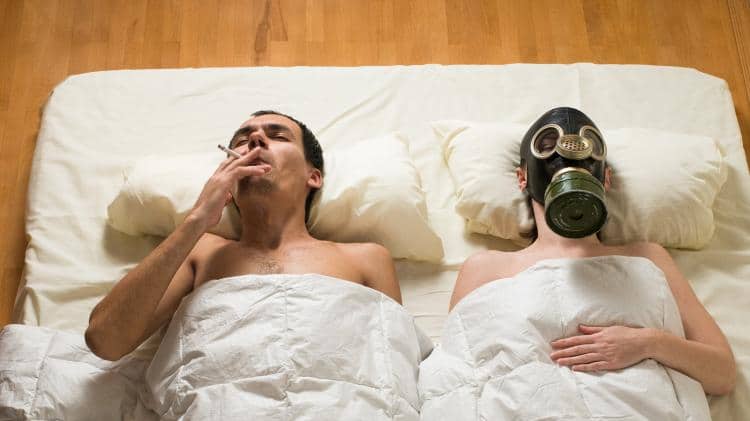 Master Odor Removal is a national leader in providing odor removal and neutral interior solutions. MOR’s “white-glove” and green certified business systems offer a 100% Guarantee! We solve auto, home and commercial odor issues such as tobacco, marijuana,  and air conditioning tobacco odor removal problems through our corporate and licensee network across the United States. Our unique service is non-toxic, non-staining, non-ionic, hypo-allergenic and we never use ozone or toxic cover-ups!

Thirdhand smoke is residual nicotine and other chemicals left on indoor surfaces by tobacco smoke. People are exposed to these chemicals by touching contaminated surfaces or breathing in the off-gassing from these surfaces. This residue is thought to react with common indoor pollutants to create a toxic mix including cancer causing compounds, posing a potential health hazard to nonsmokers — especially children.

Third hand smoke clings to clothes, furniture, drapes, walls, bedding, carpets, dust, vehicles and other surfaces long after smoking has stopped. The residue from third hand smoke builds up on surfaces over time. To remove the residue, hard surfaces, fabrics and upholstery need to be regularly cleaned or laundered. Third hand smoke can’t be eliminated by airing out rooms, opening windows, using fans or air conditioners, or confining smoking to only certain areas of a home.

Children and nonsmoking adults might be at risk of tobacco-related health problems when they inhale, swallow or touch substances containing thirdhand smoke. Infants and young children might have increased exposure to thirdhand smoke due to their tendency to mouth objects and touch affected surfaces.

Thirdhand smoke is a relatively new concept, and researchers are still studying its possible dangers. In the meantime, the only way to protect nonsmokers from thirdhand smoke is to create a smoke-free environment.

I really like the solutions and the strategy on how to remove the odor. Thank you for sharing…
https://cirts.com.au/

I really like the solutions and the strategy on how to remove the odor. Thank you for sharing…
https://CIRTS.COM.AU/

You completed certain good points there. I did a search on the subject matter and found nearly all persons will agree with your blog. Kathrine Thoma Aret

Good way of describing, and nice article to get data on the topic
of my presentation focus, which i am going to present in college.

my web-site; CBD for dogs

I know this site presents quality depending articles or reviews and additional stuff, is there any other
web site which provides such things in quality?

If you wish for to get much from this article then you
have to apply these methods to your won weblog.

Right here is the right website for anybody who wants to understand this topic.

You realize so much its almost hard to argue with you (not that I really will need to…HaHa).
You certainly put a brand new spin on a subject that’s been written about for years.
Wonderful stuff, just wonderful!

If some one needs expert view on the topic of running a blog afterward i recommend him/her to
pay a quick visit this blog, Keep up the good job.

I have read so many posts about the blogger lovers however this article is truly
a good post, keep it up.

my webpage :: with ps4 games

Hello there, You have done an incredible job. I will certainly
digg it and personally suggest to my friends.
I’m confident they will be benefited from this web site.

my blog: ps4 games the

My web site: ps4 games where

I’ve read several excellent stuff here.
Certainly price bookmarking for
revisiting. I wonder how much effort you set to create this
sort of wonderful informative site.

wonderful and also remarkable blog site. I truly intend to thanks, for providing us better details.