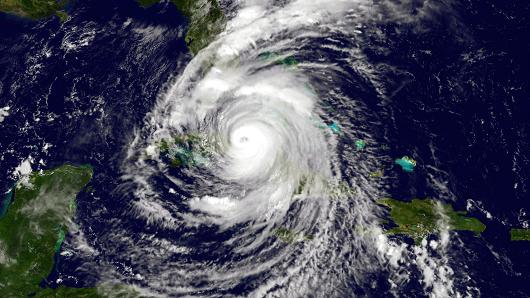 Waves poured over a Miami seawall, flooding streets waist-deep in places around Brickell Avenue, which runs a couple of blocks from the waterfront through the financial district and past consulates. High-rise apartment buildings were left standing like islands in the flood.

One woman in Miami’s Little Haiti neighborhood delivered her own baby because emergency responders were unable to reach her, the city of Miami said on Twitter. Mother and infant were later taken to a hospital, it said.

Deme Lomas, who owns Miami restaurant Niu Kitchen, said he saw a crane torn apart by winds and dangling from the top of a building.

“We feel the building swaying all the time,” Lomas said in a phone interview from his 35th-floor apartment. “It’s like being on a ship.”

On Marco Island, home to about 17,000 residents, 67-year-old Kathleen Turner and her husband rode out the storm on the second floor of a friend’s condominium after failing to find a flight out. She feared for her canal-facing home.

As evacuated Floridians sit in bumper-to-bumper traffic to head home and face the aftermath of Irma, the weakened storm is still bringing wind and rain to the Southeast.

Irma, which tore a path of destruction across the Caribbean and through Florida, has caused at least 11 deaths in the United States and left about 6.7 million people without power in five states.